A Tale of Two Future Glasgows

December 30, 2018
Despite its undoubted cultural vitality, Glasgow has often had a grim reputation, especially south of the English border. Yet the very bleakness, exacerbated by epic mismanagement, aggressive deindustrialization and sectarianism has also made it a site of constant and sometimes tragically over-ambitious attempts at utopian regeneration. This can be seen in the now highly poignant film Glasgow 1980, which was already being quietly forgotten and surpassed by harsh reality even before the city had reached the year the film is supposed to depict. It poignantly promised a gleaming, post-industrial future in which "muscle gives way to automation."


Yet in between the completion of the film and 1980, the oil shock and economic slowdown shattered the dreams of its makers and backers. Relatively little of the utopian plans (which to some already seemed dystopian) was ever built and many of the hopes of the "white heat of technology" era came to nothing. Other buildings that were completed soon ran into maintenance problems and began to decay and alienate relatively fast. The city and its surrounds are marked by these and later futures that never quite were - or which rapidly became symbols of nightmarish failure.

It's this mythology (and often tragic reality) of the rise and fall that gives the city (and its ill-conceived satellites) such an archetypal presence and inspires planners, architects, poets, artists and now electronic musicians to gaze into its future history, sometimes optimistically and sometimes despairingly. An architectural competition that took place this year encouraged participants to imagine how the city might look in 2168 and perhaps unsurprisingly, the winner had a dystopian vision of social collapse.

It's in the light of the city's history of real and imaginary failed mega-projects that we have to view perhaps the most dystopian vision of future Glasgow to have emerged so far.

"After numerous waves of social collapse, Glasgow, a once prosperous city thriving off an industry of trade and shipbuilding, had run to waste in lawless ruin. The land passed into the hands of new owners; a German-speaking conglomerate, who incorporated it into a new civic entity: Neurealm. There were grand promises of a new age; a rail network, culture facilities, new life for the city. Neurealm never came to be. The violent indifference of the citizens to the new order saw to that. In its place a rats nest of horror and gloom, the damp ruins punctuated by strobe lights, and the desperate, ecstatic violence of the gangs that rule it." 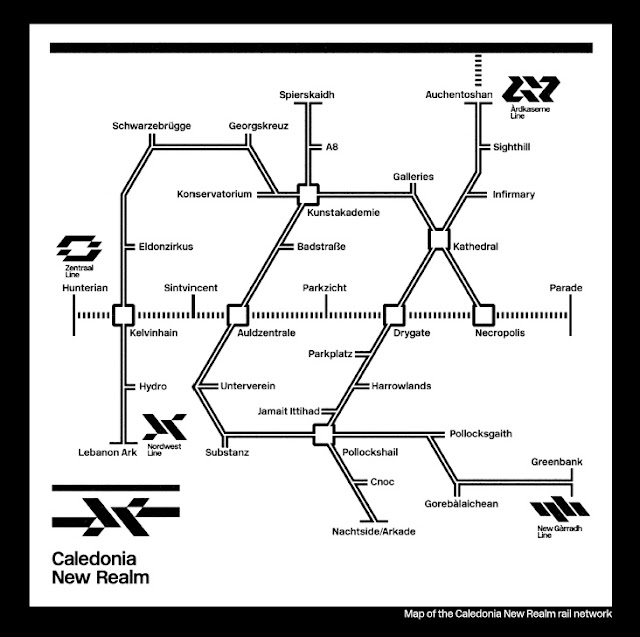 Heavy the Eclipse is a dystopian vision every bit as crazed and megalomanic as the visions of the most aggressively modernist architects. Clouds (Scottish duo Liam Robertson and Calum Macleod) have gazed into the future and created an incredibly detailed vision that's exhilarating and - (in the light of the city's history and the catastrophist trajectory of our Neofeudal era) - not completely implausible.

Sonically, it sounds hyper-contemporary, perhaps 40 days or months ahead rather than the 400 years Clouds' scenario suggests (by which time will "techno" or "jungle" still be meaningful concepts and will humans still have the autonomy to act out even dystopian scenarios?). The future it imagines is an even grander and wholly apocalyptic version of the "partying in the ruins" seen in 1990s Berlin or current Ukraine.


The soundtrack is a dystopian rave futurism blending elements of techno, jungle and Gabber (an only partly-rehabilitated style that it's still seen as best not to mention in polite company). This supports a hellish vision of a semi-completed futuristic rail network marks out territorial divides between gangs and homicidal militarised police: "a grim ravestate of factional warfare and ruin." The soundtrack is  nervy, hyper-intense and multi-directional, hyper-kinetic post-Jungle of Skulcoast.


The detailed scenario and artwork accompanying the release are intriguing and leave you to fill in the details of this epic vision. It's crying out for a full graphic novel or even film treatment. It seems intended as a warning for anyone still tempted to try and impose corporate order on the city. As a listening experience, it's as memorable, unstable and violent as the future it predicts and the dystopian anthem Parkzicht is one of the most dynamic tracks of 2018.

Popular posts from this blog

February 03, 2019
One of my photographs of the fabled sound mirrors at Denge has been used as the cover image for Eden Grey's new recording, an atmospheric, modular synth-derived soundscape. Taken on a close, ominous July day in 2014, the photo fits the sonic atmospheres well.  Listen here .
Post a comment
Read more

June 21, 2020
Five years have already passed since the fateful NSK exhibition From Kapital to Capital  in Moderna Galerija. During the weekend of the exhibition symposium there was a Laibach Kunst gramophone performance on the steps of the gallery. To commemorate, here are my recently unearthed photos of the occasion.
Post a comment
Read more

January 29, 2021
Tonight I'm taking part in this hybrid event hosted by Goldsmiths. Entitled Notes from the Underground , it's a hybrid format rather than a traditional lecture. The first part is a new film, produced at speed and under lockdown, followed by a Q & A. The film blends Test Dept archive footage and some of my local photography   with reflections from Paul Jamrozy and my own theoretical commentary. The commentary explores Test Dept's legacy and relates their work to some of Mark Fisher's concepts. The full text is below.  You'll be able to watch the event live  this evening and youtube users will be able to pose questions.  If you prefer to use Zoom, please book a free ticket .  Commentary: Test Dept Notes from the Underground DS30/Sailing the Industrial Styx  An ex-industrial site is supposed to be mute. It should know its place in the symbolic order of sedative post-imperial heritage that Test Dept have always confronted. It should be picturesque, but not intrusive
Post a comment
Read more